Growing Up With Stories

November 06, 2015
I have always been a lover of stories. Stories fascinate me. I grew up with stories. As a little child, I chased after stories with fierce yearning. Stories were not hard to find in my home. Men and women who came to my maternal grandmother to buy liquor brought with them numerous stories of all kinds.
Some days I’d hear stories of landlords taken into custody by the local panchayat (governing body in the village) for beating their coolies almost to death for not having repaid the money they borrowed. On other days I’d hear stories of young girls having eloped, cattle having been stolen, fire breaking out among the huts on the top of the hill, a religious ceremony being held to celebrate the coming of age of a girl, a young boy  drowning himself in the lake, a man killed during a fight over water, and on and on. In their drunken stupor, some customers even boldly confessed tales of their extramarital affairs. My grandmother, a local liquor seller, was a faithful guardian of their secrets.
My hometown, Thattaguppe, has many untold stories too. Tucked away in the remote forests boarding the Eastern Ghats, far from urban areas, crimes such as infanticide, rape, murder and illicit liquor brewing went undeterred and unnoticed for years.
The nights always came alive with life of its own. While the village slept, men like my father hauled bulging rubber sacs of liquor on their backs and crossed the thick woods hoping to sell it to the neighboring villages. They wanted to be sure of not getting caught by the police who were always on the lookout. On several mornings, my father had stories to tell me of how he escaped getting tramped by elephants that came looking for sugarcane or the bribes he had to give the police to let go off his younger brother who was caught. I embraced these stories for their thrill, adventure and the excitement of danger.
During the day, as a young child I would sit under the shade of the banyan tree watching the landlord shouting orders at my grandmother and her co-workers who all hailed from the Christian dalit caste, toiling under the hot afternoon sun. Even from a distance I could hear the coolies sharing stories of their broken lives to one another as they went about plucking weeds and sowing seeds. In their coarse, dry voices they’d sing songs in chorus of the tales of kings and queens, Jesus and his followers, and of princesses and places they could only imagine.

I embraced every story I have heard and I am enriched by them. In my book, “The Elephant Chaser’s Daughter,” I will tell you my own story. 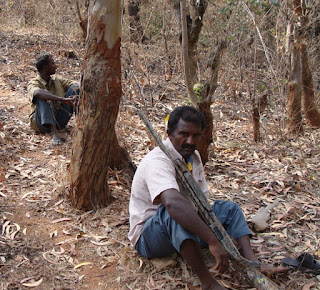